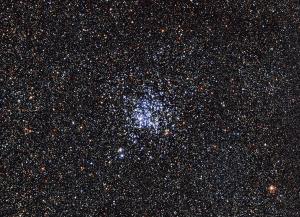 A tight group of stars marks the center of Messier 11, a star cluster 6,000 light-years away in the constellation Scutum, the shield. The cluster contains hundreds of young stars. Some of them form a pattern that resembles a duck with its wings outstretched, so M11 is also known as the Wild Duck Cluster. [ESO]

A beautiful star cluster comes into view on summer evenings. Messier 11 is more than 6,000 light-years away, in the constellation Scutum, the shield. Long ago, an observer noted that the cluster’s brightest stars make the shape of the letter V, saying they resembled a flight of wild ducks. So M11 is also known as the Wild Duck cluster.

It consists of hundreds of young stars that were all born together, from the same cloud of gas and dust. And astronomers recently measured just how young the Wild Duck is.

The brighter star is about three-and-a-half times as massive as the Sun, but almost five-and-a-half times larger. That means it’s used up the hydrogen fuel in its core and started to puff up. By comparing these numbers with models of how stars evolve, a team of astronomers concluded that the Wild Duck was born about 220 million years ago.

Here on Earth, the only witnesses to the cluster’s birth were dinosaurs and other creatures living during the Triassic Period. The dinosaurs have vanished, but the Wild Duck endures — a beautiful sight through a telescope on a summer night.