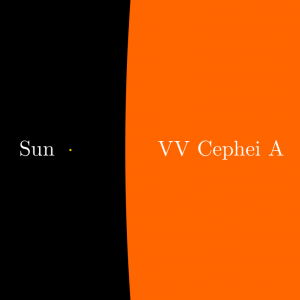 Home of the Whopper

This diagram compares the size of the Sun, which is 865,000 miles (1.38 million km) in diameter, to VV Cephei, the largest known star. If it took the Sun's place in our solar system, it would swallow the planets Mercury, Venus, Earth, Mars, Jupiter, and perhaps even Saturn, which is about 865 million miles (1.38 billion km) from the Sun. [Wikipedia]

Cepheus, the king, wheels high across the north on these mid-autumn evenings. It looks like an upside-down child’s drawing of a house. And appropriately enough, it’s a constellation that hosts a king among stars — one of the largest stars in the entire galaxy.

In truth, no one knows for sure which is the Milky Way’s largest star. That’s because the galaxy is so huge that we can see only a small fraction of its stars. Nevertheless, there’s no question that a red star named VV Cephei is one of the biggest around.

VV Cephei was born about twenty times as massive as the Sun. That made it shine hot and blue. As the star aged, though, it puffed up like a balloon, causing its outer layers to cool and turn red. Now, this red supergiant is so large that if it took the Sun’s place in our own solar system, it would swallow Mercury, Venus, Earth, Mars, Jupiter, and maybe even Saturn.

VV Cephei is thousands of light-years away, but it’s so powerful that you can still see it with the unaided eye — if the sky is dark and moonless. And this kingly star has the perfect home, in the constellation Cepheus, the king.