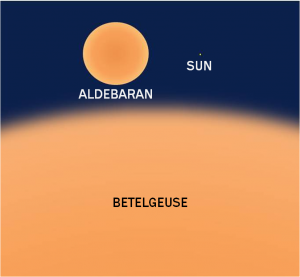 Two colorful stars accompany the Moon on the evening of April 1. Aldebaran, the eye of the bull, stands to the lower right, with Betelgeuse, the shoulder of Orion, to the left of the Moon. Both stars are thousands of degrees cooler than the Sun, so they glow with a distinctly orange hue. Both stars are far larger than the Sun, as shown in this diagram. Aldebaran is about 44 times the Sun's diameter, while Betelgeuse is roughly 20 times larger than Aldebaran. The size of Betelgeuse is a bit uncertain, in part because its outer layers are more diffuse than the Sun's, so it's more difficult to identify the star's "edge."

Two colorful stars accompany the Moon down the western sky this evening. Aldebaran, the eye of the bull, is to the lower right of the Moon. And slightly brighter Betelgeuse, the shoulder of Orion, is a little farther to the left of the Moon.

If you look closely, you’ll notice that both stars are orange — two rare specks of color in the night sky. The color is a function of their surface temperatures. Both stars are thousands of degrees cooler than the surface of the Sun. Cool stars shine red or orange, while hot stars shine blue or white. Yellow stars like the Sun are in the middle of the temperature scale.

The surfaces of Aldebaran and Betelgeuse are cool for the same reason: the stars are huge.

Both stars are nearing the ends of their lives. They’ve undergone dramatic changes in their cores, causing them to puff up. As the stars expanded, the gas at their surfaces got cooler — and redder.

Aldebaran is more than 40 times the diameter of the Sun, so it’s classified as a giant. Betelgeuse, on the other hand, is more massive than Aldebaran, so it’s inflated even more — it’s almost a thousand times the Sun’s diameter, which makes it a supergiant.

A few billion years from now, the Sun will puff up as it nears the end of its life. It’s not massive enough to reach anywhere close to the proportions of Betelgeuse. But it will resemble present-day Aldebaran — a giant star shining bright and orange.

Tomorrow: Sailing to a nursery.