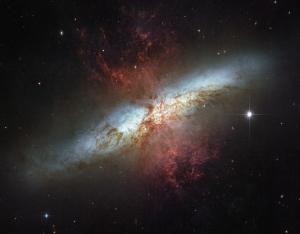 M82 is one of the most vigorous galaxies around, as this Hubble Space Telescope composite image attests. Winds from hot young stars, as well as powerful stellar explosions, blast debris away from the galaxy's disk (red filaments). The galaxy is giving birth to stars at about five times the rate of our home galaxy, the Milky Way. The activity is blowing away the gas and dust needed to give birth to even more stars, so in a few million years the rate of star formation will decline dramatically. [NASA/ESA/Hubble Heritage Team (AURA/STSCI)]

M82 is one of the most vigorous galaxies around. It’s classified as a starburst galaxy. That means that, although it’s smaller than our galaxy, the Milky Way, it spawns far more stars. But new research suggests the star-making frenzy could soon come to an end.

A galaxy makes new stars from clouds of gas, which permeate the space between stars. The densest clumps of this gas collapse, heat up, and begin to glow, shining as new stars. Each year, enough gas in M82 comes together to make the equivalent of 13 stars as massive as the Sun — a rate that’s about five times faster than the Milky Way.

But M82’s star-making career can last only as long as its gas supply does. Each year, according to the new research, the galaxy adds just three and a half Sun’s worth of new gas from its surroundings. And each year, the galaxy’s own stars expel a lot more gas through stellar winds and supernova explosions.

As a result, M82’s future looks bleak. When astronomers compare its gas consumption rate with its current supply of gas, they conclude that it’ll run out in just eight million years — the blink of a cosmic eye.

Still, M82 could buy itself some time if additional gas falls onto it. So perhaps this amazing galaxy will keep on churning out bright new stars for a while longer.

And M82 is in Ursa Major, the big bear. It stands to the upper left of the bowl of the Big Dipper as night falls right now, and is visible through a small telescope.