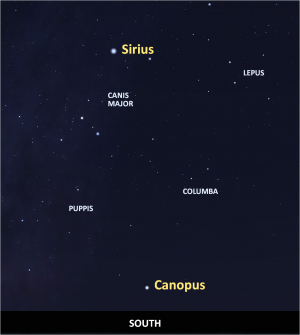 Sirius and Canopus are the gold and silver medalists in the night sky -- the brightest and second-brightest stars, respectively. They wheel across the south and southwest on March evenings. Canopus is so far south, though, that it's visible only south of about Dallas. (This view is from Dallas, about two hours after sunset on March 1.)

Sirius, the brightest star in the night sky, arcs across the southwest on March nights. It’s low in the south at nightfall, and wheels westward later on. Not only is it especially bright, it’s also especially twinkly — it shifts from blue to red to white in the blink of an eye.

Sirius is visible from most of Earth’s surface — all but the high Arctic. But the second-brightest star has a more limited range. Canopus is a stunner from the southern hemisphere, but north of the equator it’s tough to see. You have to be south of about San Diego or El Paso to find it. And even then it never climbs more than a few degrees above the horizon.

Canopus itself is quite a bit more impressive than Sirius. It’s far larger and more massive, and about 500 times brighter. But it’s also close to 300 light-years farther, so it can’t quite match Sirius’s luster.

Canopus is at the end of its “normal” lifetime, so it’s quite puffy. If it took the Sun’s place in our own solar system, it would extend all the way out to Mercury. But no one is quite sure whether it’s getting even bigger, or if it’s starting to “deflate” after going through a puffier phase. Either way, Canopus will continue to shine brightly in Earth’s night sky — even if not everyone can see it.

If you’re far enough south, look for Canopus quite low in the south beginning as darkness begins to descend. The star is due south around 9 p.m., almost directly below Sirius.