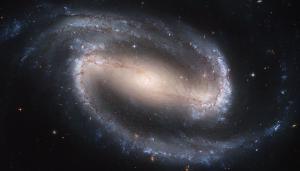 NGC 1300 is one of the most beautiful barred spiral galaxies in the universe. It consists of a long bar of mainly older stars across its middle, with dramatic spiral arms, which contain many young stars, spinning off the bar's ends. The galaxy, shown here in a Hubble Space Telescope image, is about 20 million light-years away, in the constellation Eridanus. [NASA/ESA/Hubble Heritage Team (STScI/AURA)]

Few sights in the universe rival that of a dramatic barred spiral galaxy. These grand galaxies feature two massive spiral arms that sweep away from the ends of a huge bar, which forms the galaxy’s heart. As a result, such a galaxy looks like a sweeping letter S.

By coincidence, the southern sky tonight features two of the most dramatic barred spirals in the heavens. Through a telescope, you can see them standing due south in mid-evening. One of the galaxies, NGC 1300, is in the large constellation Eridanus, the river. The second galaxy, NGC 1365, is south of the first, in the neighboring constellation Fornax, the furnace.

In both galaxies, the enormous spiral arms contain giant clouds of gas and dust. New stars are born from these clouds. Some of these new stars are especially hot and bright, so their light illuminates the spiral arms. The long bar that connects the arms contains mainly older stars, which are fainter and redder than many of their young stellar cousins.

Our own galaxy, the Milky Way, is also a barred spiral. But the bar isn’t all that prominent, so astronomers recognized it only in the latter half of the twentieth century. If we instead lived in a dramatic barred spiral like NGC 1300 or 1365, we probably would have discovered the bar long ago.