Stellar nurseries are scattered throughout the galaxy — giant clouds of gas and dust that are collapsing to make new stars. Many of them are big, and most are far away. But a fairly small one is just 350 light-years from home. And it’s one of the youngest nurseries as well — only about five-and-a-half million years old.

The nursery is known as the Epsilon Chamaeleontis Association. It’s in the constellation known as the Chamaeleon, which is too far south to see from the United States.

Astronomers have logged only a few dozen stars in the cluster. Most are smaller and fainter than the Sun. The list also may include something rare: a quintuple system.

Despite its small size, the cluster is a great place to watch the process of starbirth. The stars were all born at the same time, in the same place, and from the same material, so it’s easy to compare them.

It’s also a good place to look for the birth of planets. A planet is born from gas and dust left over from the formation of a star. But it’s uncertain just how the process plays out. Having so many young stars to observe may help astronomers figure it out. So far, they haven’t found any planets in the cluster. But they’ve seen several stars that are encircled by disks of gas and dust. And there’s evidence that one of the disks contains a giant planet.

So astronomers will keep an eye on Epsilon Cam as it gives birth to more stars — and maybe planets. 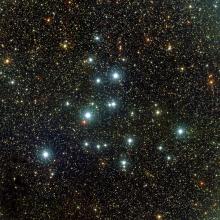 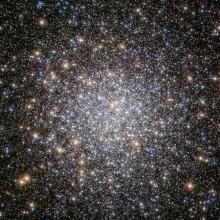