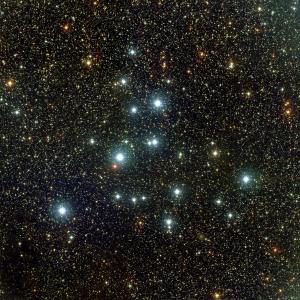 Although it is sparsely populated, the star cluster Messier 39 sparkles in this ground-based image. The cluster, which is near the tail of Cygnus, contains about 30 stars. It's an especially good target for binoculars. [Heidi Schweiker/WIYN/NOAO/AURA/NSF]

You don’t always need a telescope to enhance the beauty of the night sky. For many objects, a pair of binoculars will do just fine. In fact, some objects look better through binoculars.

One example is the star cluster Messier 39. It’s high in the northeast at nightfall, to the lower left of Deneb, the bright star that marks the tail of Cygnus, the swan.

M39 is a bit sparse. Binoculars reveal about 30 stars, which are spread across about seven light-years of space. Seen from the cluster’s distance of a thousand light-years, that span is roughly the size of the full Moon.

And that’s why M39 is best seen through binoculars. A good pair will allow you to see the entire cluster in a single view. Three bright stars form a wide triangle, with the other members of the cluster roughly filling in the space between them. A telescope typically sees a smaller field of view, so it can’t take in the entire cluster all at once.

And if you have especially clear, dark skies, you might just make it out with your eyes alone. It looks like a faint, hazy smudge of light below the swan.

In the future, M39 will undergo periods where it’s a lot more prominent. A few of its brighter stars are nearing the ends of their “normal” lifetimes. When they reach that end, they’ll puff up to many times their current size, making them shine much brighter. That’ll make M39 stand out — no matter how you look at it.