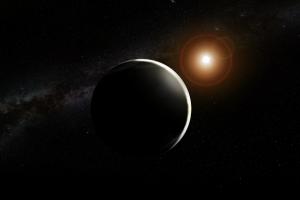 This artist's concept depicts the star Gliese 1151 and its possible companion planet. The interaction between the star and planet produces radio waves, which is how the planet was discovered. It was confirmed with follow-up observations by optical observations by the Habitable Zone Planet Finder, an instrument attached to the Hobby-Eberly Telescope at McDonald Observatory, and at other observatories. [Arndt Stelter/Wikipedia]

Astronomers have developed many ways to find planets in other star systems. The latest is with radio waves.

The first planet found that way was detected a couple of years ago by LOFAR, an array of radio telescopes in Europe. The planet orbits Gliese 1151, a star that’s 26 light-years away. The star is only a fraction the size and mass of the Sun, and its surface is thousands of degrees cooler than the Sun’s.

LOFAR picked up hints that something small was orbiting close to the star, but there was a wide range on the numbers. An instrument in the Canary Islands narrowed it down a bit. And another instrument zeroed in even more.

The Habitable-zone Planet Finder is attached to the Hobby-Eberly Telescope at McDonald Observatory. It’s designed to find planets orbiting small, faint stars. Its observations revealed that the planet at Gliese 1151 is about two and a half times the mass of Earth. It orbits the star once every couple of days.

It’s inside the star’s corona — a thin but hot outer atmosphere of charged particles. The planet interacts with the corona in a way that creates radio waves.

The discovery suggests that bigger radio telescopes in the future may be able to find many more planets — adding to the catalog of worlds beyond the solar system.

Gliese 1151 is in Ursa Major. As night falls, the star’s close to the lower left of the bowl of the Big Dipper. But it’s too faint to see without a telescope.