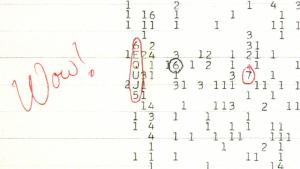 On August 15, 1977, a radio telescope at Ohio State University recorded an odd signal from the constellation Sagittarius. An impressed astronomer circled the signal and added his own comment. Although it looked like it could have come from an extraterrestrial civilization, repeated searches in the intervening decades have come up with nothing, suggesting the signal could have been terrestrial radio interference. [Big Ear Radio Observatory and North American AstroPhysical Observatory (NAAPO)]

Astronomers have been looking for signals from other civilizations for more than 60 years. They haven’t found any — at least none they can confirm. But 45 years ago today, they heard one that generated a lot of excitement: the “wow” signal.

Astronomers at Ohio State were using a radio telescope to scan for evidence of extraterrestrial intelligence. And they found one signal that seemed to fit all the criteria. It was strong, it had a narrow bandwidth, and it was at the right frequency.

The signal lasted for 72 seconds — the longest the telescope could scan any specific object. So the signal probably was longer than that. It was recorded on a paper graph. And when the observatory director saw it, he wrote “Wow!” beside it.

But when the telescope looked for the signal again the next night, it got nothing. There was nothing on the following nights, either. And no one has heard a peep since then.

It’s not for a lack of trying. Many observatories scanned that region of space soon after the signal was reported. And they’ve kept looking since then. A big campaign a few years ago spent about a hundred hours looking for it. It’s challenging, though, because the precise location of the wow signal is uncertain.

The search area is in Sagittarius, which is low in the south at nightfall. Its brightest stars form the outline of a teapot. The search area is to the left of the teapot — the one location where we might have heard ET.