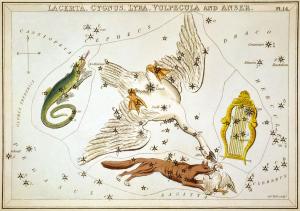 A star that shows us what the Sun will look like billions of years from now arcs high across the sky at this time of year. The star has passed the end of its “normal” lifetime and is well toward its final act.

Anser is the brightest star of Vulpecula, the fox. The star’s name means “the goose.” It comes from the constellation’s original name, the fox and goose.

The star is a red giant. That means it’s old and bloated, and  looks dull orange. It’s used up the original hydrogen in its core, converting it to helium. Now, it’s fusing the hydrogen in a thin layer around the core.

In response to that, the star’s outer layers have puffed up. The star is more than 40 times wider than the Sun, and more than 400 times brighter.

But Anser’s mass is almost exactly the same as the Sun’s. Since the way a star ages is determined mainly by its mass, that means Anser should have aged at about the same rate as the Sun will. The best estimates say that Anser is more than 11 billion years old, versus four and a half billion for the Sun. So when we look at Anser, we’re seeing what the Sun will look like in six or seven billion years: an old, bloated star at the end of its life.

Anser is in the east as night falls. Despite its size and brightness, it’s so far away that it looks quite faint. In fact, you need pretty dark skies to see it — streetlamps or other bright lights will wash it out, leaving the goose hidden in the glare.