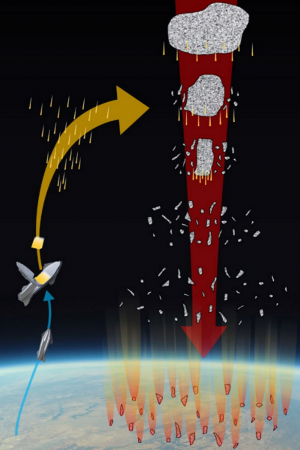 This illustration depicts a proposed planetary defense system that could rip apart asteroids on a collision course with Earth. Known as Pi-Terminal Defense for Humanity, it would dispatch a "kill vehicle" to approach the asteroid. It then would shatter, blasting thousands of bits of shrapnel toward the target. That could rip the asteroid to shreds. The asteroid's fragments then would enter the atmosphere relatively harmlessly, inflicting little or no damage. NASA has funded a study of the concept, which its creators say could intercept dangerous objects with as little as a few weeks, days, or even hours notice, depending on the size of the target. [Philip Lubin]

Asteroids hit Earth all the time. Most of them are so small that they burn up in the atmosphere. But a few either explode in the air or slam into the surface. That can cause damage ranging from broken windows to extinction of most of Earth’s life.

So scientists have been working on ways to protect us from potential impacts. If an asteroid or comet is far enough out, we might be able to nudge it into a safe orbit. If it’s closer, we might have to nuke it. And a new idea is designed to save us from impacts that are weeks or even hours away.

The concept is headed by Philip Lubin of the University of California-Santa Barbara. It would deploy “kill vehicles” in Earth orbit or on the Moon. If an asteroid or comet was detected on a collision course with Earth, a vehicle would intercept it. It would blast out thousands of tiny bits of shrapnel. They’d tear into the object, ripping it apart. The fragments would either miss Earth or enter the atmosphere and burn up.

NASA has funded a study of the concept. The team says it could potentially destroy an asteroid or a comet up to a kilometer in diameter with as little as 60 days warning. Smaller but still hazardous targets could be intercepted in as little as days or even hours.

Such a system would take years to develop and deploy. And it might face challenges from space treaties. Yet it’s one more possible weapon in the fight to protect Earth from deadly cosmic missiles.