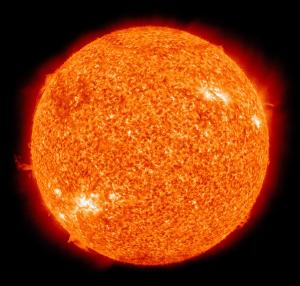 Bright magnetic storms and geysers of hot gas highlight this image of the Sun at ultraviolet wavelengths by Solar Dynamics Observatory, a space telescope. The Sun's magnetic field varies with a roughly 11-year cycle, slightly changing its total energy output. Astronomer Charles Greeley Abbot, eventual secretary of the Smithsonian Institution, spent most of his career trying to quantify the Sun's total energy output as a tool for improving weather forecasts. [NASA/SDO (AIA)]

Charles Greeley Abbot was ahead of his time. He was interested in the Sun — not so much as a star, but for more practical reasons. He wanted to use it to improve weather forecasts, and to power everyday devices. He received more than 15 patents related to solar energy — the last when he was 100 years old.

Abbot was born 150 years ago today, on a farm in New Hampshire. He quickly showed that he was clever and inventive; at age 13, he designed and built a forge to help repair tools.

Abbot studied physics at MIT. There, he met Samuel Pierpoint Langley, director of the Smithsonian Astrophysical Observatory. He soon joined Langley, then took over the director’s job after Langley died. And in 1928, he became secretary of the entire Smithsonian.

Abbot was especially interested in how much energy the Sun produced, and how that changed over time. He thought such knowledge could help provide better weather forecasts. So Abbot established three observatories to study the question, then spent decades analyzing the results. He concluded that the Sun’s energy output varied by several percent. He turned out to be wrong, though — the variation is only a fraction of one percent.

Abbot created many solar-powered devices, and wrote about solar power plants. He patented a solar cooker, a boiler, and a system to remove salt from seawater. Abbot received his final patent less than two years before he died, at age 101.