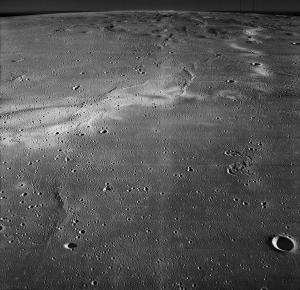 The bright tadpole-shaped area in this photograph of the Moon from Lunar Orbiter 2, a 1960s mission, is known as Reiner Gamma. It's in the Ocean of Storms, a giant impact basin paved with volcanic rock. The feature generates its own magnetic field, which is stronger than the Moon's overall field. Yet scientists don't yet understand why it's magnetic or how it was created. A planned mission will drop a robotic rover on the site in a few years, perhaps solving the mysteries about this enigmatic feature. [NASA]

One of the oddest features on the Moon is a 40-mile-long tadpole. It’s much lighter than the surrounding landscape. And it has its own magnetic field, which is stronger than the Moon’s overall field.

Reiner Gamma is in the Ocean of Storms — a giant basin paved with volcanic rock. Reiner Gamma is one of the most famous features on the entire Moon — and one of the least understood. Scientists don’t know just what it is, how it formed, or how its magnetic field is generated. It could be the impact site of a comet, although that’s one of several possible explanations.

Scientists may be able to explain Reiner Gamma before too long, though. NASA’s planning to send a mission there in the next two or three years. Known as Lunar Vertex, it’ll consist of a lander and a rover.

The lander will map the area with cameras, and measure details about the magnetic field. The rover will trundle at least a third of a mile away — well outside any contamination from the lander’s rocket engine. It, too, will study the magnetic field. It’ll also study the composition of the bright material that outlines the “tadpole” of Reiner Gamma.

Look for the Moon before dawn tomorrow. The bright planets Jupiter and Mars are to its left, with Jupiter by far the brighter of the two. The Ocean of Storms is a large dark area at the top of the lunar crescent — home to one of the strangest features on the Moon.