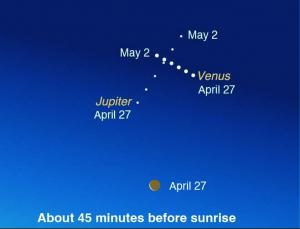 Venus and Jupiter, the brightest objects in the night sky after the Moon, will stage a spectacular encounter at dawn in late April and early May. The Moon joins them on the morning of April 27 before disappearing in the twilight the following morning. [Tim Jones]

The two brightest points of light in the night sky will almost merge into a single point over the next few mornings. For a couple of days, they’ll be separated by just half a degree — less than the width of a pencil held at arm’s length.

Venus and Jupiter are low in the east at first light. Venus is the brighter of the two — the magnificent “morning star.” It’s about six times brighter than its companion, Jupiter.

The planets are headed in opposite directions right now. Venus is slowly dropping toward the Sun as seen from Earth, so it’s a little lower in the sky each morning — and also a tiny bit fainter. Those changes take a long time to play out, though, so Venus will remain in view in the morning sky until late summer. It’ll pass behind the Sun in October, then climb into the evening sky.

Jupiter, on the other hand, is moving away from the Sun. It stands a little higher in the sky each morning, and shines a little brighter. It’ll reach its peak in late September, when it lines up opposite the Sun and shines all night long.

For now, though, look for Venus and Jupiter beginning shortly before dawn. Tomorrow, they’ll be separated by about a degree and a half. On Saturday, the gap will be just half a degree. It’ll be about the same on Sunday, but the two planets will have switched positions. After that, the brilliant worlds will slide away from each other. But they’ll remain fairly close for several days.