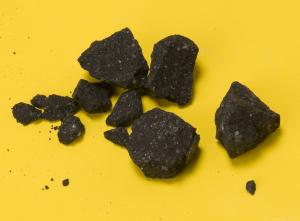 A meteor exploded above Sutter's Mill, California--site of the 1848 California gold rush--on April 22, 2012, triggering a new rush as scientists and collectors poured in to gather the pieces. These tiny fragments, weighing just a few grams, were collected from a parking lot near the historic mill. Analysis showed that the original asteroid that hit Earth's atmosphere was older than Earth itself. It split away from a larger body tens of thousands of years ago, and it contained many of the chemical building blocks of life. [Peter Jenniskens (SETI Institute)/Eric James (NASA/ARC)]

In January 1848, a worker at Sutter’s Mill, in northern California, discovered gold. That started the California Gold Rush, which attracted hundreds of thousands of people.

A smaller rush was triggered at Sutter’s Mill 10 years ago today. An asteroid exploded above northern California, raining meteorites across the region. Scientists, collectors, and others rushed in to pick up the pieces.

It all began shortly before 8 a.m. A brilliant fireball streaked across the sky, then exploded. Residents across the area saw the fireworks. They also heard booms and rumbles echoing through the foothills of the Sierra Nevada.

Instruments designed to listen for nuclear-bomb tests recorded the explosion. Witnesses shot photos and videos. And weather radar tracked the falling debris. That helped scientists zero in on where meteorites fell.

Researchers determined that the original rock was roughly the size of a minivan, but weighed as much as a Boeing 737. It hit the atmosphere at about 65,000 miles per hour, then blew up at an altitude of 30 miles.

Scientists found the first fragments just a couple of days later. In all, they gathered a couple of pounds of material. Analysis showed that the original asteroid was older than Earth itself. It split away from a larger body tens of thousands of years ago. And it contained many of the chemical building blocks of life — scientific “gold” from Sutter’s Mill.