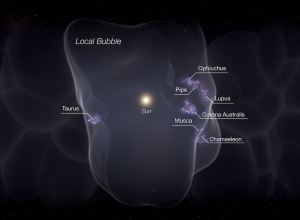 The birth of most of the young stars near the Sun may have been triggered by an expending bubble of gas known as the Local Bubble. This diagram shows the bubble's contours, with several stellar nurseries identified along its rim and the Sun near its center. The bubble formed about 14 million years ago when a massive star exploded as a supernova. A shockwave from the blast, along with those from several other supernovas, began clearing a great cavity in the surrounding gas. That compressed clouds of gas and dust, causing them to collapse and give birth to new stars. [Leah Hustak/STScI]

Our solar system sits near the center of the Local Bubble — a cloud that’s a thousand light-years across. Its surface is bedazzled by several clusters of young stars.

In a recent study, astronomers obtained precise details about nearby young stars from Gaia, a space telescope that’s mapping more than a billion stars. They then used data visualization software to plot the locations of the stars. Catherine Zucker, a member of the team, explained what they found:

The bubble began about 14 million years ago, when a star exploded as a supernova. The shockwave, along with those of other supernovas, began clearing a giant cavity.

ZUCKER: As this bubble expands, it sweeps up clouds of gas and dust on its surface sort of like a snowplow can sweep up snow.

Some of that gas and dust collapses to form new stars, including the ones measured by Gaia.