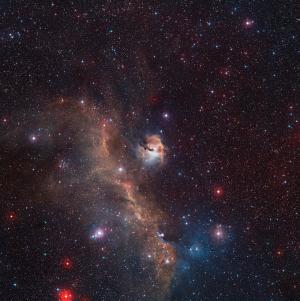 Clouds of gas and dust and thousands of new stars outline the Seagull Nebula, a vast stellar nursery along the border between the constellations Monoceros and Canis Major. The "wings" span a hundred light-years. Many of the stars are especially hot, so they produce huge amounts of ultraviolet radiation. The UV zaps the surrounding gas, causing it to glow bright pink. Starlight also reflects off patches of dust, coloring them blue. Stars are still being born in the nebula, which is about 3,700 light-years away. [ESO/Digitized Sky Survey 2]

A seagull with a hundred-light-year wingspan flies across the southwest on these early spring evenings. It’s not far from Sirius, the brightest star in the night sky.

The Seagull Nebula is a complex of several giant clouds of gas and dust. One of the clouds forms the gull’s wings, and a smaller one forms its head.

All of the clouds are stellar nurseries. They’ve given birth to thousands of stars, with many more still taking shape. Some of the stars are especially massive and hot. They produce a lot of ultraviolet light, which makes the nebula glow. The radiation zaps hydrogen gas, causing it to emit red light. And the starlight reflects off grains of dust, creating patches of blue.

Those massive stars are both helping and hindering the birth of more stars. In addition to radiation, the stars produce powerful winds of charged particles. They compress the gas and dust around them, causing some of the material to collapse and form new stars. At the same time, the radiation and particles blow some of the gas and dust away, preventing it from making stars.

The Seagull Nebula is about 3700 light-years away. It’s along the border between the constellations Canis Major, the big dog, and Monoceros, the unicorn. At nightfall, the nebula is close to the upper left of brilliant Sirius. The seagull is too faint to see with the eye alone, but it’s an easy target for binoculars and small telescopes.