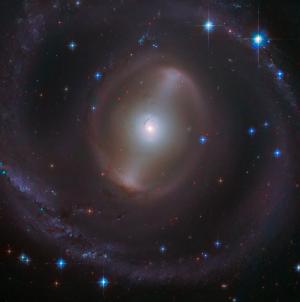 A giant "bar" of stars slashes across the center of NGC 2217, a spiral galaxy about 65 million light-years away, in Canis Major, the big dog. The galaxy is roughly the same size as our home galaxy, the Milky Way, which also has a central bar. The bar may have been created by the gravitational influence of another galaxy, which passed close to NGC 2217. The bar funnels gas and dust from the galaxy's spiral arms toward its center. That causes big clouds of gas and dust to collapse and give birth to new stars. It also feeds the supermassive black hole at the center of the galaxy. [ESA-Hubble/NASA/J. Dalcanton]

Spiral galaxies are a bit like snowflakes — they’re all beautiful, but no two look just alike.

Consider NGC 2217. It’s tens of millions of light-years away, in Canis Major, the big dog. It’s about the same size as our home galaxy, the Milky Way. But it looks much different — like sunlight reflecting off a silver hubcap. It consists of a big oval “bulge” of stars in the middle, with bars of stars extending off its ends. They connect with tightly wound spiral arms that enfold the center of the galaxy. More spiral arms form an almost perfect circle around those.

That layout may suggest that the galaxy was hit by a smaller galaxy. As they collided, NGC 2217 was stirred up. That might have transformed its layout from something similar to the Milky Way to what we see now.

The bars are feeding gas and dust into the center of the galaxy. Along the way, some of that material may give birth to new stars. And the stuff that doesn’t make new stars may be funneled into the supermassive black hole at the galaxy’s heart.

Whatever is happening, it’s molded NGC 2217 into its current form — a unique spiral galaxy — just like all the rest.

Canis Major is in the southeast at nightfall. Look for its brightest star, Sirius — the brightest star in the night sky. The body of the dog extends below and to the lower right of Sirius. NGC 2217 is near one of the dog’s back feet. But you need a telescope to pick it out.