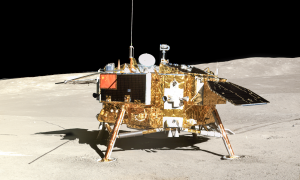 A New Side of the Moon

Chang'e 4, the first spacecraft to land on the far side of the Moon, was photographed by the Yutu rover, whose tracks are visible to the right of the lander. Another Chinese mission, Chang'e 5, brought a few ounces of rocks and dirt back to Earth. Early analysis shows the samples are the youngest bits of the Moon yet studied, at an age of about 1.7 billion years. [CSNA/Siyu Zhang/Kevin Gill]

Scientists in China are digging into a rare treasure: bits of the Moon that were brought to Earth last December. The lunar samples could be the youngest ever studied.

The samples were gathered by Chang’e 5. At the same time it was operating, Chang’e 4 was working on the lunar farside — the hemisphere that always faces away from Earth. It didn’t bring back samples, but it did dispatch a rover to study the surroundings.

They’re the most ambitious lunar probes since the 1970s. And China is planning even more-ambitious trips in the years ahead.

Chang’e 4 landed in January 2019, and it’s still going. It used radar to look into the ground below, recording several thick layers. That suggests that its landing site — a crater that’s far south of the equator — is filled with debris from the impacts that formed several other craters. The most recent layer was deposited about 3.6 billion years ago.

Scientists expect the samples from Chang’e 5 to be less than one-and-a-half billion years old — the youngest bits of the Moon yet studied. The samples would help fill in details of the Moon’s recent history.

Future Chinese missions will orbit the Moon, land on it, drive across it, and even fly across it — perhaps leading to a lunar base in the next decade.

For now, look for the Moon teaming up with Venus — the “evening star” — early this evening. They’re low in the sky as night begins to fall, and set a couple of hours later.