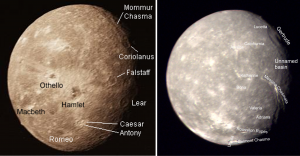 As befits a giant planet, Uranus has a giant entourage of moons — at least 27 of them. Yet the planet is so far away that its moons are tough to see. In fact, most of them weren’t discovered until the last few decades.

William Herschel discovered the first two in 1787 — not long after he discovered the planet itself. Herschel proposed naming them for characters from Shakespeare, and his colleagues agreed. So those first discoveries were named Titania and Oberon, for the queen of the fairies and her husband from “A Midsummer Night’s Dream.”

Not surprisingly, they’re the biggest of all the planet’s moons. Titania is a thousand miles in diameter, while Oberon is just a bit smaller.

Since then, the moons have come in bunches. The Voyager 2 spacecraft revealed 10 new moons when it flew past the planet in 1986. The rest have been found since then, with Hubble Space Telescope, telescopes on the ground, and through more analysis of the Voyager observations — giving Uranus a mighty entourage.

Uranus itself is in view all night, in the constellation Aries. It’s brightest for the year, too. It’s so far away, though, that you really need binoculars to see the planet — and a telescope to see any of its moons.