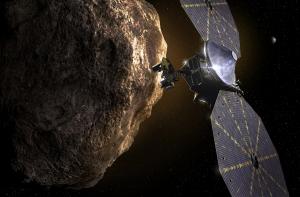 Lucy, a mission scheduled for launch at 4:34 a.m. CDT October 16, streaks by an asteroid in this artist's concept. It will be the first spacecraft to study Trojan asteroids, which share an orbit with Jupiter. There are two big clumps of Trojans, traveling 60 degrees ahead of and behind Jupiter. Lucy will fly past an asteroid in the asteroid belt, then reach the first clump of Trojans in 2027. It will fly past five bodies in that clump before proceeding to the other, where it will arrive in 2033. NASA will provide live coverage of the launch beginning at 4 a.m. [SwRI]

A spacecraft scheduled for launch as early as this week is designed to study two clumps of asteroids that have been trapped since the solar system was young. Its observations could provide new details on how the planets were born. It might also tell us about the origin of Earth’s organic compounds — the chemical building blocks of life.

The main targets for Lucy are Trojan asteroids. These chunks of ice and rock share the orbit of Jupiter, but they’re nowhere near the giant planet. One clump is 60 degrees ahead of Jupiter, the other 60 degrees behind. They’re held in place by the gravity of Jupiter and the Sun. And there could be millions of them.

Trojans probably are “leftovers” from the birth of the solar system. They contain the same materials that were incorporated into the planets, so studying them should tell scientists more about how the planets formed.

In addition, many Trojans contain organic compounds. Similar compounds could have been incorporated into the young Earth, so the Trojans could tell us more about the development of life on our planet — and the possibility of life on other worlds of the solar system.

Lucy is scheduled to fly past one asteroid in the asteroid belt, between the orbits of Mars and Jupiter. It’ll reach one group of Trojans in 2027, and eventually swing by five of its members. It’ll then skip past Earth, using our planet’s gravity to reach the other clump in 2033.