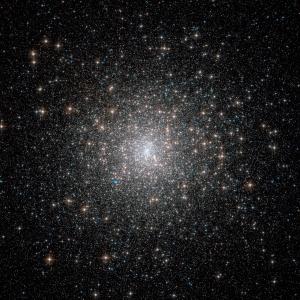 This Hubble Space Telescope image shows Messier 15, an ancient star cluster in Pegasus. It contains some of the oldest stars in the galaxy. Some of its stars are nearing the ends of their lives so they're puffing up and getting cooler, shining dull orange. One star has already passed this stage of life, sloughing off its outer layers to form a planetary nebula (blue blob to the lower left of center). [ESA-Hubble/NASA]

Our Sun is impressively old — four and a half billion years. That means it’s been around for roughly a third of the lifetime of the universe. But some stars in the galaxy have been around for almost the entire life of the universe. And many of them reside in a star cluster in Pegasus known as Messier 15. It’s one of the oldest clusters in the entire Milky Way — and one of the most tightly packed.

M15 probably was born about 13 billion years ago — roughly a billion years after the Big Bang. Any big, massive stars it contained have long since expired. About all that’s left are stars that are smaller and fainter than the Sun — about half a million of them. The main exceptions are a few stars that have puffed up and gotten brighter at the ends of their long lives.

The cluster spans about 175 light-years. But half of its stars are found in the central 20 light-years. That makes it one of the most densely packed clusters in the galaxy. And it means that if there are any planets in M15’s heart, their night skies are ablaze with hundreds or thousands of stars at least as bright as anything in our skies.

M15 is on the edge of the constellation Pegasus. As night falls, it’s far to the upper right of the flying horse’s most prominent feature — four moderately bright stars known as the Great Square. Through binoculars, the cluster looks like a hazy patch of light — the soft glow of relics from the early universe.