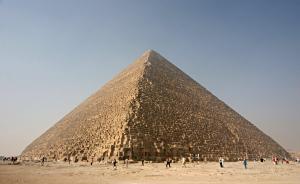 The pyramid of Khufu, the largest of the pyramids of Giza, was built with the help of Thuban, a star in the coils of Draco, the dragon. At the time the pyramid was built, about 4,500 years ago, Thuban served as the North Star, so architects aligned the sides of the pyramid with the star's location in the sky. Thanks to a wobble in Earth's orbit, however, Thuban no longer marks the celestial north pole. It will regain that position in another 21,000 years. [Nina Alden Thune/Wikipedia]

The stars have always served as guides for navigation. And in the northern hemisphere, none has been more convenient than the North Star. It always stands due north, every hour of the night — the anchor for the entire sky.

It’s a moving anchor, though. Thanks to a “wobble” in Earth’s rotation, our planet’s axis points to different stars at different eras. Today, it aims at Polaris. But thousands of years ago, it aimed at a star in the coils of Draco, the dragon.

The star is called Thuban — a name that means “the serpent.” It’s near the tail of the dragon’s winding outline.

Thuban served as the North Star at the time the pyramids of Giza were being built in Egypt. Architects used the star to help align the sides of the pyramids. And they achieved a near-perfect alignment with the cardinal directions.

Over the centuries, though, Thuban drifted away from the celestial pole. The gravitational pull of the Sun and Moon cause Earth to wobble like a spinning gyroscope that’s winding down. It takes 26,000 years to make one wobble. Thuban was closest to the pole almost 5,000 years ago. And it’ll resume that position in another 21,000 years — returning the north pole to the clutches of the dragon.

Thuban is in the northwest at nightfall. It’s far to the left of Polaris, at about the same height. While Polaris stays put, though, Thuban will circle below it — a once-and-future North Star looping around the current one.