Although the Moon looks bright, its surface is actually one of the darkest of any major body in the solar system. On average, it reflects only about a tenth of the sunlight that strikes it. That makes the Moon almost as dark as charcoal.

There is one prominent bright spot on the Moon, though — a crater named Aristarchus. Although it’s tiny as seen from Earth, it’s such a contrast to the surrounding landscape that it’s visible to the unaided eye. It’s near the left edge of the Moon as the Moon rises late this evening, above the bright star Aldebaran, the “eye” of the bull.

Aristarchus is about 25 miles across, and a couple of miles deep. A mountain peak rises from its floor like a skyscraper. The crater is surrounded by bright “rays” of debris that were blasted out by the impact that made it.

Observations by spacecraft in lunar orbit show that the crater floor contains a lot of minerals that are rich in titanium. They probably came from far below the surface, and were brought to the surface by the impact.

There’s some evidence that the area around Aristarchus is volcanically active. Observers have reported seeing flashes of light or odd glows in the area, including in the crater itself. And instruments have revealed traces of a radioactive gas. That could mean that gas sometimes erupts from below the surface — briefly adding to the luster of this bright lunar feature.

Tomorrow: drawing up a little horse. 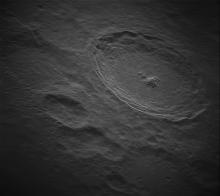