A Passel of FRBs 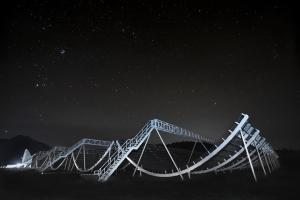 CHIME, a radio telescope in British Columbia, stares skyward as Aldebaran and the Pleiades wheel overhead. The telescope has discovered more than 500 fast radio bursts. They last only a fraction of a second but most appear to come from far outside the Milky Way Galaxy, so they must be extremely powerful. Astronomers are still trying to identify what powers them, and the CHIME trove will help. [CHIME Collaboration]

Fast radio bursts are among the most powerful objects in the universe. Many of them are hundreds of millions of light-years away. Despite their great power, though, there’s no consensus on what they are. But a whole passel of new discoveries may help.

Fast radio bursts were first seen in 2007. But they last only a tiny fraction of a second, which makes them hard to track down.

By earlier this year, astronomers had seen about 140 of them. But a few months ago, they got 535 more to study. The new ones were discovered by CHIME — a radio telescope in British Columbia that scans the entire northern sky.

Most of the objects in the new catalog have produced a single outburst. But a few have repeated themselves. Their outbursts last a little bit longer than the others, and they have a tighter range of frequencies. That suggests there are two classes of “bursting” objects.

The class that repeats may be produced by magnetars — the super-dense and ultra-magnetic corpses of once-mighty stars. They spin up to hundreds of times per second, beaming energy into space with each turn.

In fact, CHIME and other telescopes detected a radio outburst from a magnetar in our own galaxy. So repeating bursters could be powered by one mechanism, while those that are seen only once are powered by something different. Detailed study of all the new observations — as well as future outbursts — will help astronomers figure it out.

A Passel of FRBs | StarDate Online