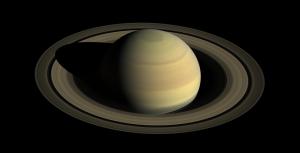 The Cassini spacecraft snapped this view of Saturn and its magnificent rings shortly before the start of summer in the planet's northern hemisphere. The north pole is at top, surrounded by a hexagon of clouds. Because Saturn is so far from the Sun, each season lasts more than seven years, so even though this image was snapped several years ago, it's still summer in the north. Scientists have detected wind shifts and other atmospheric changes associated with the changing seasons. [NASA/JPL/SSI]

Summer’s just about over here in the northern hemisphere. It ends on Wednesday, at the equinox. On the planet Saturn, though, it’s still the middle of summer. And the season won’t end until 2025.

Saturn has seasons for the same reason that Earth does — its axis is tilted. And the tilt is about the same as Earth’s, so the seasonal effects are about the same. Since it’s northern summer, Saturn’s north pole is dipping toward the Sun. That brings more sunlight to the northern hemisphere — and constant sunlight at the pole.

But Saturn is much farther from the Sun than Earth is — by an average of almost 800 million miles. At that distance, it takes the planet almost 30 years to circle the Sun. When you divide that by four seasons, it means that each season lasts about seven and a half Earth years.

Scientists have watched the changing seasons in detail over the last few decades. They’ve seen changes in color and brightness at the poles and at the equator. They’ve also measured changes in wind speeds.

Giant storms appear on the planet once every 30 years or so. That suggests they’re related to the cycle of seasons. Scientists haven’t confirmed the link, though — a link to the long seasons on Saturn.

The planet is in good view tonight. It’s close to the upper left of the Moon at nightfall, and looks like a bright star. The brighter planet Jupiter is off to the left. More about the Moon and Jupiter tomorrow.