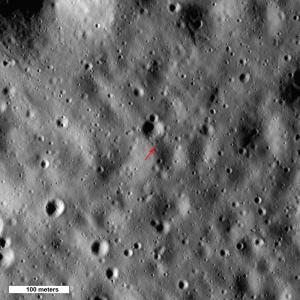 It's not much to look at, but Selenean Summit, indicated by the red arrow, is the tallest spot on the Moon. Scientists used readings from laser altimeters plus stereo images for lunar orbiters to measure the elevation of the entire lunar surface. This spot, on the lunar farside, is 35,387 feet above the average elevation. [NASA/GSFC/Arizona State University]

The highest spot on the Moon isn’t a dramatic mountaintop. It barely qualifies as a hill — it’s more like a knob. It doesn’t loom above the surrounding landscape, and its slopes are gentle. Yet it’s almost seven miles high — more than a mile higher than the tallest spot on Earth, Mount Everest.

Since there aren’t any oceans on the Moon, scientists don’t use sea level to measure elevation. Instead, spacecraft have used lasers and cameras to produce 3-D maps of the surface. Combining all those observations provides an average elevation. Individual features are then plotted using that starting point.

The tallest mountain on the moon is Mons Huygens, which towers more than three miles above the surrounding plains. But its peak isn’t the tallest spot on the Moon. That honor goes to a feature called Selenean Summit. It’s near the rim of a crater on the farside — the side we never see from Earth. It’s 35,387 feet high. It probably formed as debris from a giant impact more than four billion years ago piled up.

The lowest spot on the Moon is the floor of a nameless crater that’s inside a bigger crater. It’s more than five miles below average. So that gives the Moon a range in elevation of more than 12 miles — almost identical to the range on Earth.

The Moon is low in the south as night falls. And it has a bright companion — Antares, the heart of the scorpion, which is close to the lower right of the Moon.