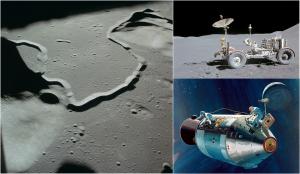 Three views of Apollo 15, a mission that landed on the Moon 50 years ago. From left: This orbital view of the landing site shows Hadley Rille, a collapsed lava channel, twisting around the Apennine Mountains, one of the tallest ranges on the Moon; astronauts Dave Scott and Jim Irwin logged several miles in this buggy, the first lunar rover in history; an artist's concept shows astronaut Al Worden, at left, making the first deep-space walk, collecting film from cameras he operated in lunar orbit while his crewmates landed. [NASA]

The Apennine Mountains are the tallest on the Moon. They top out at almost three miles above the surrounding plains. And for Apollo 15 astronauts Dave Scott and Jim Irwin, who landed at the base of the Apennines 50 years ago today, they offered quite a view.

SCOTT: Oh, look at the mountains today, Jim, when they’re all sunlit — isn’t that beautiful? IRWIN: It really is. SCOTT: By golly, that’s just super. It’s, you know, unreal!

The mountains represented some of the Moon’s earliest crust. And another nearby landmark — a canyon known as Hadley Rille — contained evidence of fairly recent volcanic activity.

Scott and Irwin bagged about 170 pounds of rocks and dirt. And they covered a lot of ground — about 17 miles — in the first lunar rover.

SCOTT: This is really a rockin’, rollin’ ride, isn’t it? I’ve never been on a ride like this before. Oh, boy. I’m glad they’ve got this great suspension system on this thing.

Scott and Irwin spent three days on the Moon. Then they rejoined crewmate Al Worden, who’d been operating a set of Moon-watching cameras from orbit. During the trip home, Worden took the first “walk” in deep space to retrieve the film.

Before they left orbit, though, the astronauts achieved one more “first”: They ejected a small satellite to observe the environment around the Moon.

It operated for several weeks — extending the work of Apollo 15.