End of the Shuttle 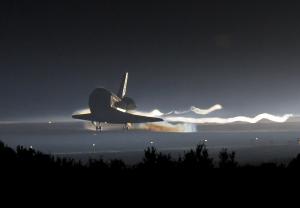 The space shuttle program wrapped up 10 years ago with the landing of Atlantis at the end of mission STS-135, at Kennedy Space Center, on July 21, 2011. The shuttle logged 135 launches, and its astronauts assembled the International Space Station, deployed and serviced Hubble Space Telescope and other spacecraft, and conducted hundreds of scientific experiments. After two deadly accidents, however, NASA decided to ground the fleet. [NASA]

[Double booms] MISSION CONTROL: Piercing the pre-dawn skies, the space shuttle announces its arrival at the launch site with its signature sound of twin sonic booms, having gone subsonic for the last time.

The space shuttle program rolled to a halt 10 years ago today. Atlantis completed the 135th shuttle mission, 30 years after the first.

The shuttle had been intended to replace almost all of America’s rockets. NASA promised to launch up to a flight a week. But shuttles were harder to maintain than expected. So launches were separated by months, not days.

Still, the shuttle was a remarkable machine. Its crews launched and repaired satellites, including Hubble Space Telescope. They conducted experiments. And they built most of the International Space Station.

But after the shuttle Columbia was destroyed during re-entry in 2003, NASA decided to ground the fleet after the space station was done.

For the final flight, Atlantis carried up spare parts and scientific equipment. Then it headed home. AUDIO: three bells. ISS: Atlantis departing the International Space Station for the last time.

MISSION CONTROL: Nose-gear touchdown. ... Having fired the imagination of a generation, a ship like no other, its place in history secured, the space shuttle pulls into port for the last time—its voyage at an end.

End of the Shuttle | StarDate Online