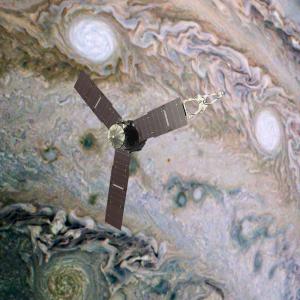 The Juno spacecraft soars above the turbulent skies of Jupiter in this composite image. It combines an artist's concept of the spacecraft with an enhanced Juno image of Jupiter. Scientists are using precise tracking of Juno to refine their models of Jupiter's orbit. NASA recently extended Juno's mission through September 2025. [NASA/SWRI/MSS/Tracy Prell]

You might think that after centuries of carefully tracking the planets, astronomers could tell you precisely where they are, or where they will be in the future. And for the most part, you’d be right. They do know the positions of the planets well enough to send spacecraft to explore them. But they can still be off by a tiny bit.

They’re using one of those spacecraft to narrow the margin of error for Jupiter, the largest planet in the solar system.

An array of radio telescopes is tracking Juno, which has been orbiting Jupiter for five years. The array consists of 10 dishes that are scattered from Hawaii to the Virgin Islands. Combined, they provide observations that are as sharp as a single dish thousands of miles wide.

The same technique was used to track the Cassini spacecraft as it orbited Saturn, the second-largest planet. The observations improved the accuracy of Saturn’s orbit by a factor of about 10.

Scientists expect Juno to do the same for Jupiter. In fact, it’s already improved our knowledge of Jupiter’s orbit by a factor of four.

Juno’s mission had been scheduled to end in July. But NASA extended it to September 2025 — providing a lot more time to track the giant of the solar system.

Jupiter and Saturn line up near the Moon in the wee hours of tomorrow morning. Saturn is close to the upper right of the Moon, with brighter Jupiter farther to the left of the Moon.

More about the Moon and Jupiter tomorrow.