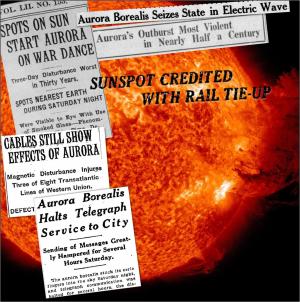 A powerful storm on the Sun in May 1921 created powerful problems for people on Earth. It started fires at telegraph stations and railroad facilities, knocked out telegraph lines across the United States and Europe, and disrupted some telephone lines and radio broadcasts. Because several of the problems were near New York's Grand Central Terminal, the storm is sometimes known as the New York Railroad Storm. The storm began with a coronal mass ejection--an eruption of billions of tons of charged particles from the Sun like the one at the right edge of this 2011 image. Earth's magnetic field directed some of that material toward the surface, where it triggered brilliant displays of the northern and southern lights but caused lots of mischief. Other storms have caused problems since then, and scientists suggest that a powerful one, such as the one from 1921, could cause major problems for current technology. [Background image: NASA/SDO]

In May of 1921, technology went haywire. Telegraph lines shut down, and some telegraph offices caught fire. Some railroads briefly ground to a halt. Telephones crackled, and some radio transmissions were nothing more than static.

The cause of this mayhem was a massive storm on the Sun. A clump of sunspots almost a hundred thousand miles wide produced violent eruptions. They sent clouds of charged particles racing through the solar system.

When the clouds hit Earth, our planet’s magnetic field guided the particles toward the surface. That created spectacular displays of the northern and southern lights. And it set up electrical currents in phone wires, railroad tracks, and the ground itself. These currents overloaded the era’s technology.

The vanguard of the cloud headed for Earth 100 years ago today. But things got really interesting the next day. Telegraph service in the northeastern U.S. and elsewhere dropped out as fuses blew and generators were overloaded. On May 14th and 15th, electrical fires burned down a telegraph office in Sweden. They also claimed a railroad station in Brewster, New York, and perhaps a railroad control tower near Grand Central Terminal. As a result, the disturbance is known as the New York Railroad Storm, although problems were recorded around the world.

If a storm of that power hit Earth today, it could knock out satellites, phone service, and entire power grids — perhaps bringing modern technology to a standstill.