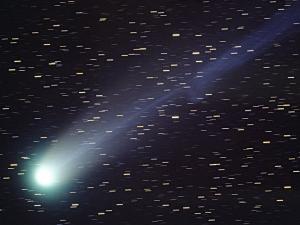 Comet Hyakutake shows off its long, bright tail in this image from March 25, 1996. The comet passed less than 10 million miles from Earth on that date, which was the closest passage by any comet in two centuries. Hyakutake had been discovered just two months earlier by an amateur astronomer in Japan. By the time of its closest approach it was an easy target for the unaided eye, even from most cities. It was moving so fast, though, that it quickly faded from sight. It isn't expected to visit the inner solar system again for another 70,000 years. [E. Kolmhofer, H. Raab/Johannes-Kepler-Observatory, Linz, Austria]

A brilliant visitor to the inner solar system zipped by Earth in March of 1996. Comet Hyakutake was closest to us 25 years ago tomorrow — less than 10 million miles away. That was the closest passage by a comet in two centuries.

The comet had been discovered just two months earlier by an amateur astronomer in Japan. It quickly became visible to the naked eye. And by the time of its closest approach, its tail spanned more than a third of the sky. It was moving so fast, though, that it faded from sight in just a few weeks.

The comet itself wasn’t much — a ball of ice and rock less than three miles in diameter. As it approached the Sun, though, solar energy vaporized some of the ice at its surface. That surrounded the comet with a cloud of gas, as well as dust and pebbles that were also released into space. The Sun’s radiation and the solar wind “blew” that material outward, forming a tail. Later observations showed that the tail spanned about 360 million miles — four times the distance from Earth to the Sun.

Tomorrow: Digging in to a scientific treasure box.