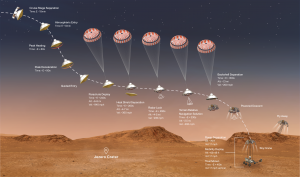 The Perseverance rover will face a daunting series of events as it descends to the surface of Mars on February 18. It will use a heat shield, a parachute, and rockets attached to a structure above the rover, known as a sky crane. The crane will slowly lower the rover to a touchdown in Jezero Crater, which was filled with water billions of years ago. Perseverance will look for evidence of life, cache samples of rocks and dirt for a future mission to retrieve and bring back to Earth, and deploy a small helicoper to test the technology. [NASA/JPL]

Once upon a time, Jezero Crater would have been prime real estate on Mars. The crater held a lake about as big as Lake Tahoe. And water flowed both in and out, keeping it fresh. The crater’s rim would have been a great spot for a summer home.

The lake vanished by three and a half billion years ago. But Jezero is set to once again become prime real estate. An American rover is scheduled to land there on Thursday. It’ll trundle across the landscape for years, digging into the sediments on the lakebed in search of evidence of ancient life. It’ll even stash some samples for a future mission to pick up and bring back to Earth.

Perseverance is based on the Curiosity rover, which has been working on Mars since 2012. Perseverance’s instruments will analyze the Martian rocks and dirt, look for ice buried below the surface, and track the weather.

Perseverance also carries a small helicopter, which will make several short hops across the landscape.

Jezero Crater formed when a giant asteroid slammed into Mars more than four billion years ago. Mars was much warmer and wetter then, so there was water on the surface. Rivers cut through the crater rim. That created deltas that are still visible today. The deltas could preserve evidence of ancient microbes.

The crater lake was at least 800 feet deep. It flowed over the lowest part of the rim, emptying into the plains below — adding to the appeal of this intriguing Martian crater.