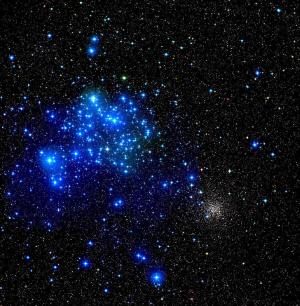 Dust glows blue in this image of Messier 35, a young star cluster in Gemini. Some of the dust, which reflects starlight, is left over from the cluster's birth. The cluster is about 175 million years old and about 3,000 light-years away. A second cluster, NGC 2158, forms a tight white group to the lower right of center. [Canada-France-Hawaii Telescope/2003]

Many bright, beautiful stars highlight winter nights. The bounty includes Castor and Pollux, the twins of Gemini. But a family of stars at the feet of the twins would put our night sky to shame. It’s a cluster that may contain several thousand stars packed into a fairly small volume of space. And quite a few of those stars are bright. So from a planet inside the cluster, the night sky would sparkle with many stars that are brighter than any in the skies of Earth.

Messier 35 is almost 3,000 light-years away, and it spans a couple of dozen light-years. So as seen from Earth, it covers an area as big as the Moon.

Gemini is in the eastern sky at nightfall. Castor and Pollux are at the left of the constellation, with slightly fainter Castor above its “twin.” The bodies of the twins stretch to the right. M35 is at the feet of the twins, far to the upper right of Castor and Pollux.