Landing on another planet is tough even now. Until 50 years ago today, though, it had been impossible. A half dozen attempts by the Soviet Union to land on Venus had failed, and the United States hadn’t even tried.

On December 15th of 1970, though, a Soviet probe successfully touched down on Venus — but just barely. It was the first landing on any other planet.

The Soviets had launched two Venus landers. The first one never left Earth orbit. But Venera 7 made it. It parachuted through the atmosphere, transmitting its observations during the descent.

The parachute failed shortly before touchdown, though. So Venera 7 hit the surface with a big thump. That knocked it over on its side, so its antennas weren’t in a good position. To tracking stations on Earth, in fact, it sounded like the craft was dead.

A week or so later, though, a review showed that Venera 7 had operated for another 23 minutes.

A careful analysis of its observations confirmed that Venus is extremely hot. Even though Venera 7 landed on the night side of the planet, temperatures were more than 850 degrees Fahrenheit. The probe also found that the atmosphere was about 90 times denser than Earth’s. And it showed that the surface was made of solid rock — some important findings from a mission that barely made it.

Venus is low in the southeast at dawn. It’s the “morning star” — and the first planet to receive a working visitor from Earth. 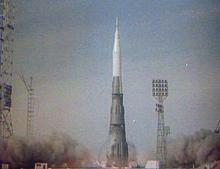