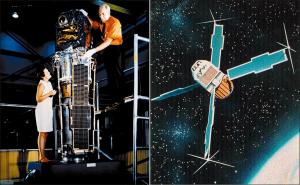 Marjorie Townsend and Bruno Rossi examine the Uhuru satellite (also known as Explorer 42) a few weeks before its launch on December 12, 1970. Townsend was the mission manager -- the first woman to manage any spacecraft project. At right, an artist's concept depicts the craft in orbit. Uhuru was the first X-ray observatory in space. It discovered black holes, neutron stars, the remnants of exploded stars, and other energetic objects. It was named Uhuru (Swahili for "freedom") in honor of Kenya because the craft was launched from a platform off the Kenyan coast (using an American rocket and an Italian launch crew). [NASA (2)]

The first confirmed black hole sits near the center of the Summer Triangle — a pattern of three bright stars that’s in the west on December evenings. Cygnus X-1 was discovered during a short rocket flight in 1964. But strong evidence of its nature was provided by a later mission. Called Uhuru, it was launched 50 years ago today.

The craft was designed to study X-rays. They’re produced by some of the hottest and brightest objects in the universe. But Earth’s atmosphere absorbs X-rays, so we can’t see them from the ground. The only way to study them is from space.

Uhuru was the first X-ray space telescope. It originally was known by a couple of other names. But it was launched by Italy from a platform off the coast of Kenya. In honor of the host country, it was renamed Uhuru — Swahili for “freedom.”

Besides its international pedigree, it had a couple of other distinctions. It was the first science satellite managed by a woman — Marjorie Townsend, an engineer at Goddard Space Flight Center. And its top scientist, Riccardo Giacconi, later won the Nobel Prize for this and other X-ray missions.

Uhuru cataloged four times the number of X-ray sources known before its mission. The list included the remnants of exploded stars, hot binary stars, galaxy clusters, and the disks around black holes. The craft took a close look at several of those targets — including Cygnus X-1, the first confirmed black hole.