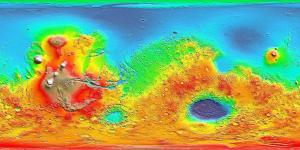 This elevation map shows a pronounced difference between the northern and southern hemispheres of Mars. The average elevation of the northern hemisphere is miles lower than the southern (lower elevations are in blue and green, higher in orange and red). The dichotomy could be the result of a collision between Mars and another planet in the early solar system. The highest elevations represent giant volcanoes (which circles at left). A long system of deep canyons, Valles Marineris, extends to the right of the volcano complex. The large, dark oval at right is Hellas Basin, a giant impact crater, which represents the lowest area on the entire planet. [NASA/GSFC]

If you look at an elevation map of Mars, one thing really stands out: The northern hemisphere is a lot lower than the southern hemisphere. And planetary scientists are still trying to figure out why.

On average, the northern third of Mars is a mile or two lower than the rest of the planet. And there’s evidence that water once pooled there, forming a giant ocean.

There are several possible explanations for the difference in the two hemispheres.

Another idea is that the northern hemisphere was pounded by several big impacts.

And yet another says the cause was home-grown. Early Mars might have had plate tectonics like those on Earth. Motions in the crust and mantle could have piled up rocks in the southern hemisphere, making the crust there about 15 miles thicker than in the north.

Each of these ideas has problems, though. So there’s no final explanation for the “deep” difference in the Martian hemispheres.

Look for Mars near the Moon tonight. It looks like a bright orange star. It’s above the Moon at nightfall, and to the right of the Moon as they set in the wee hours of Thanksgiving.