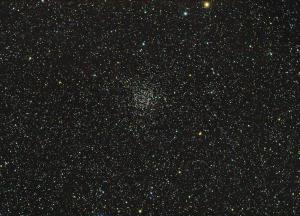 NGC 7789, a star cluster in the constellation Cassiopeia, is also known as Caroline's Rose. It was discovered by Caroline Herschel, in 1783, and its outline resembles a rose. The cluster is at least 6,500 light-years away and contains between 600 and 1,000 stars. [Hunter Wilson/Wikipedia]

Cassiopeia is awash in star clusters. More than half a dozen clusters that are easy targets for binoculars huddle close to the letter “W” formed by some of the constellation’s brighter stars. And several fainter clusters are close by as well.

Clusters are common in Cassiopeia because the constellation lies along the glowing band of the Milky Way. When we look in that direction, we’re looking into some of the galaxy’s most densely populated regions.

One of the constellation’s busiest clusters is NGC 7789. At nightfall, it’s close to the right of Beta Cassiopeia, the star at the top right point of the W, which is in the northeast. Binoculars reveal a “haze” of stars, while a small telescope shows dozens of individual stars.

The cluster is also known as Caroline’s Rose. It’s named for its appearance — it resembles the petals of a rose — and for its discoverer, Caroline Herschel, who first saw it in 1783.

Caroline’s Rose isn’t as well understood as some of the other clusters in Cassiopeia. Even so, astronomers have put together a few details. It’s 6500 light-years away or farther, for example. It probably has somewhere between 600 and 1,000 stars, making it a fairly massive cluster. Most of the stars are packed in the cluster’s dense core, which spans about 30 light-years. And the stars are roughly a third the age of the Sun — a youthful stellar family in Cassiopeia.

Tomorrow: A giant planet moves around a bit.