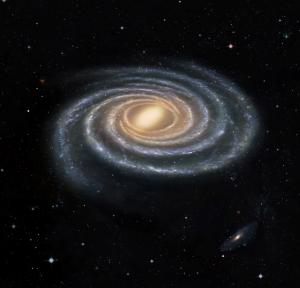 A new study produced this diagram of our home galaxy, the Milky Way. It consists of a long bar of mainly old stars in the center, with several spiral arms wrapping off the ends of the bar. Earth is about 27,000 light-years from the center. The bar funnels gas toward the center of the galaxy, where it piles up and gives birth to new stars. The ends of the bar appear to lie in the constellation Sagittarius, which looks like a teapot. [Xing-Wu Zheng & Mark Reid/BeSSeL/NJU/CfA]

Everything about our home galaxy, the Milky Way, is humongous. The galaxy’s disk spans at least a hundred thousand light-years. It contains hundreds of billions of stars. And a giant bar of stars may inhabit the middle of the galaxy.

Figuring all of that out hasn’t been easy. It’s like the old adage about not being able to see the forest for the trees. Since we’re inside the galaxy’s disk, our view of the Milky Way’s overall design is limited. So the bar wasn’t discovered until a few decades ago. And even now, astronomers aren’t sure about its details.

Recent observations suggest it’s shaped a little like a baguette, with rounded, tapered ends. It’s anywhere from a few thousand to tens of thousands of light-years long. And one of its ends may point toward the solar system.

The bar may have formed from a giant rotating disk of stars in the center of the galaxy. Gravitational interactions between stars pushed many of the stars into elongated orbits — forming the bar.

Spiral arms loop off both ends of the Milky Way’s bar. They may funnel gas toward the bar. So the intersection of a bar and a spiral arm is a busy stellar nursery; more about that tomorrow.

The end of the Milky Way’s bar is in Sagittarius, which is low in the south at nightfall. Look for a “teapot” of moderately bright stars. The center of the galaxy is in the “steam” above the teapot created by the glow of millions of stars in the galaxy’s disk.