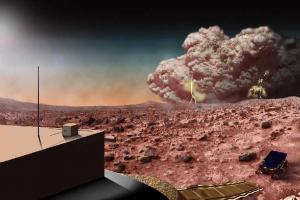 An electrically charged dust storm roars toward a small Mars rover in this fanciful illustration. Giant dust storms sometimes do blanket Mars. A planetwide storm in 2018 killed the Opportunity rover by blotting out the Sun, leaving the rover's solar cells unable to generate enough energy to sustain it. Scientists have studied possible lightning activity in dust storms, but have not been able to confirm it. [NASA]

A Mars rover came to a dark end in June of 2018. A dust storm blanketed all of Mars, blotting out the Sun. The Opportunity rover couldn’t get enough sunlight to power its solar batteries. So after 14 years and 28 miles of roving, it went dark.

The irony is that the dust storm stirred to life because Mars itself was receiving more solar energy than average. The planet was approaching its closest point to the Sun, known as perihelion. And Mars is at perihelion today for the first time since then.

Mars’s orbit around the Sun is lopsided. At its closest, the planet is about 27 million miles closer to the Sun than at its farthest. That means it receives about 40 percent more sunlight. That warms the surface.

As it warms, frozen carbon dioxide atop the polar ice caps begins to vaporize. It rushes into the atmosphere, making it thicker. It also pulls along plumes of dust that can rise high into the sky. Over weeks or even days, the dust can cover a large area. Some years the storms are as big as states or countries. But sometimes, they cover most or all of the planet.

That’s what happened in 2018, in one of the biggest storms yet seen. But such monsters don’t happen on a predictable cycle. They stir up in some years, but not others. And even if there’s a big storm this year, it’s no threat to the only working rover on Mars. Curiosity has a nuclear power source. That allows it to keep going — even when the Sun goes dark.