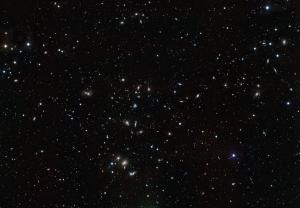 Hundreds of galaxies populate this view of the Hercules galaxy cluster, which is about 500 million light-years from Earth. The system includes a high proportion of interacting galaxies -- two or more galaxies that are close enough for their gravity to affect the shape and evolution of each galaxy. The interactions can pull great streamers of stars out into space, while causing vast gas clouds to collapse to give birth to tens of thousands of new stars. Some of the interactions will result in mergers, with two or more galaxies forming a single giant galaxy. [ESO/INAF-VST/OmegaCAM. Acknowledgement: OmegaCen/Astro-WISE/Kapteyn Institute]

Stars pass by each other without much effect. That’s because the average distance between stars is millions or billions of times the size of the stars themselves.

But it’s a different story with galaxies. These massive “cities” of stars are so big that there’s not a lot of space between them. As a result, they frequently sideswipe one another, or even collide head-on.

Many examples of interacting galaxies are found in the Hercules Cluster. It’s a collection of a couple of hundred galaxies that’s about 500 million light-years away. The cluster is in the constellation Hercules, which is high overhead at nightfall.

The cluster is a bit unusual.

Most clusters in the nearby universe contain many big, dull galaxies known as ellipticals. These galaxies are dominated by old, faint stars. And they have little gas and dust for giving birth to new stars, so not much happens in them.

The Hercules Cluster, though, is dominated by spiral galaxies, which are similar to our own Milky Way. These galaxies have many hot, young stars, plus the raw material for many new stars. As a result, they’re bright and vigorous.

Many of the cluster’s galaxies are interacting. Groups of two or three galaxies are passing so close together that their gravity rips out big ribbons of stars, and causes clouds of gas and dust to collapse to create more stars. So even though the Hercules Cluster isn’t all that big, it’s one of the busiest clusters around.