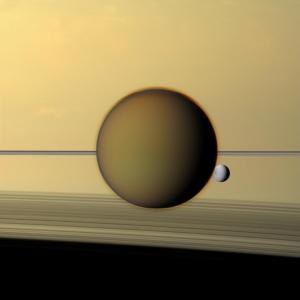 Titan and Dione, two moons of Saturn, cross paths above Saturn and its rings, viewed edge-on, in this view from the Cassini spacecraft. Titan is Saturn's largest moon and the first moon of any planet known to have an atmosphere (a discovery made at McDonald Observatory in 1944). The dense, cold atmosphere is topped by an orange "smog." The atmosphere produces clouds and rains of liquid hydrocarbons, which form river channels and fill lakes and seas. [NASA/JPL/SSI]

A beautiful trio highlights the after-midnight sky tonight: the Moon and the planets Jupiter and Saturn. Jupiter is the brighter of the two worlds, but Saturn stands closer to the Moon.

A telescope will reveal Saturn’s largest moon, Titan. In fact, if you look at Titan with even a modest backyard telescope, you’ll know almost as much about the little world as astronomers did until well into the 20th century.

Dutch astronomer Christaan Huygens discovered Titan in 1655. In the 1880s, George Hill determined its mass by measuring its gravitational effects on the orbit of another of Saturn’s moons.

The first big breakthrough in understanding Titan came in 1944. Using the brand-new 82-inch telescope at McDonald Observatory, Gerard Kuiper detected the chemical “fingerprint” of methane — revealing that Titan has an atmosphere. It was the first moon in the solar system known to have an atmosphere, and it’s the only moon with a thick atmosphere.

Bigger telescopes allowed astronomers to see Titan more clearly, yet they revealed few details. That’s because a thick “haze” at the top of the atmosphere conceals the surface. It took visits from spacecraft to reveal the surface. The Cassini mission, for example, used radar to peer through the clouds. It showed us lakes and seas filled with liquid hydrocarbons, plus giant sand dunes and ice volcanoes — wonders on a world we’ve known about for a long time, but are just starting to know.