The biggest ball of stars in the Milky Way Galaxy creeps low across the south on June evenings. But it might not have been born in the galaxy. Instead, it may be the core of a smaller galaxy that was grabbed by the Milky Way billions of years ago.

Omega Centauri is classified as a globular cluster. It’s the biggest and brightest in the galaxy. It contains about 10 million stars. They’re all packed into a ball that’s about 150 light-years in diameter. In the cluster’s core, stars may be just a tenth of a light-year apart. By comparison, the Sun’s closest neighbors are more than four light-years away.

Several lines of evidence support the idea that Omega Centauri was born in another galaxy. For one thing, its orbit around the center of the Milky Way is backwards from the general flow. For another, its chemistry doesn’t quite match that of the Milky Way’s other stars.

So it seems likely that the cluster was the core of a dwarf galaxy that passed close to the Milky Way. The Milky Way’s gravity grabbed the smaller galaxy and pulled it in. The stars in the galaxy’s outer regions were absorbed into the body of the Milky Way. But the core stuck together – forming a bright globular cluster.

Omega Centauri is quite low in the south as night falls. From the northern third of the United States, in fact, it’s below the horizon, so it’s not visible at all. From other locations, it looks like a faint, fuzzy star – the remnant of a galaxy. 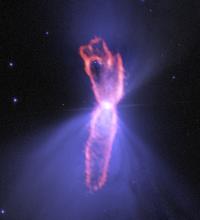