A sequence of images shows Mount St. Helens before, during, and after its eruption on May 18, 1980. The massive eruption blew the top 1,300 feet off the top of the mountain. It was one of the most powerful and destructive volcanic eruptions in American history. The image at left shows the mountain the day before the eruption, while the image at right shows a smaller outburst, in 1980. [USGS (3)]

As the Sun rose on May 18th of 1980, Mount St. Helens was the fifth-tallest mountain in Washington State — almost 10,000 feet tall. By sunset, it didn’t even rank in the top 50. The volcano had staged a massive eruption. It chopped 1300 feet off its height — and blasted away one whole side of the mountain.

It was one of the most powerful and destructive eruptions in American history. It killed almost 60 people, and flattened dozens of square miles of forest. It melted tons of ice and snow and sent the water roaring down rivers. And it expelled a cloud of ash that turned day to night across much of Washington.

Mount St. Helens is a stratovolcano. Such peaks are the most dangerous volcanoes because they can erupt quickly and violently. They have much steeper sides than the shield volcanoes found in Hawaii.

Volcanoes have been seen on several other worlds of the solar system. Most of them are shield volcanoes. There’s evidence of a few stratovolcanoes on Mars, but it’s hard to tell for sure — it’s likely that none of them has erupted in millions of years or longer.

Mount St. Helens erupted a few more times in 1980, although none with the force of the initial blast. And it’s been active several more times since then — most recently in 2008. Today, it’s rated as a “very high threat” to eventually erupt again — perhaps knocking it even farther down the list of Washington’s tallest mountains. 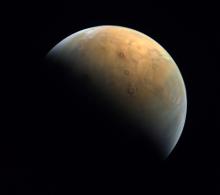