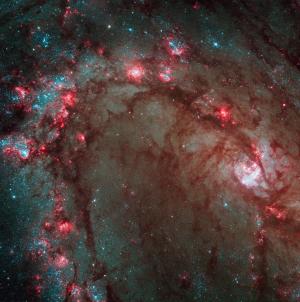 Stellar nurseries line up like bulbs on a string of Christmas lights in this Hubble Space Telescope image of the spiral galaxy Messier 83. The galaxy is like a miniature version of the Milky Way Galaxy. This view shows the galaxy's core (at right) and part of one of its spiral arms. Blobs of red along the arm are giant clouds of gas and dust that are giving birth to new stars. The image also reveals bubbles outlined in red that are filled with brilliant blue stars, all of which have formed only recently. M83, which is also known as the Southern Pinwheel Galaxy, is about 15 million light-years away, in the southern constellation Hydra, the water snake. [NASA/ESA/Hubble Heritage Team (AURA/STScI)]

A “mini-Milky Way” arcs low across the south on spring evenings. It’s a galaxy that probably resembles the Milky Way, but it’s only half as big.

Messier 83 is a beautiful spiral that we view face-on. It’s only about 15 million light-years away, so the view is especially good. The galaxy has a “bar” of stars across its middle, with spiral arms extending from the ends of the bar. That appearance has earned it a nickname: the Southern Pinwheel.

Although it’s much smaller and less massive than the Milky Way, M83 is much busier. It’s giving birth to many new stars. Astronomers have discovered about 3,000 star clusters in the galaxy, many of which are less than five million years old. They’ve also discovered the remnants of about 300 massive stars that exploded fairly recently.

All that activity may be the result of a near-collision with another galaxy. The galaxies may have passed near each other a billion years ago. The gravity of each galaxy squeezed clouds of gas and dust in the other galaxy. That caused the clouds to collapse and give birth to new stars — a process that continues today.

M83 is in Hydra, the water-snake. It climbs into view a couple of hours after sunset, and is low in the south around midnight. The galaxy is too faint to see with the eye alone. Binoculars reveal a small, hazy circle of light. Telescopes reveal more detail — a beautiful galaxy pinwheeling across the southern sky.