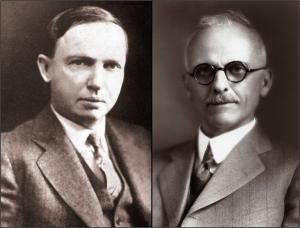 Astronomers Harlow Shapley (left) and Heber Curtis staged one of the most famous discussions in the history of astronomy on April 26, 1920. They were debating the size of the Milky Way Galaxy and whether the universe extended beyond the galaxy's boundaries. Their discussion is known today as the Great Debate. Curtis was correct in asserting that the universe consists of many other galaxies, not just the Milky Way, but Shapley was right about the scale of the Milky Way. [ESO]

Telescopes routinely study galaxies that are billions of light-years away. But just a century ago, no one knew that the universe extended that far. While many astronomers were coming around to the concept of a vast universe, many others thought the entire universe was contained inside the Milky Way Galaxy.

Two astronomers outlined these viewpoints 100 years ago Sunday, at a meeting in Washington, D.C. Their discussion is known today as the Great Debate.

Heber Curtis argued that the universe consisted of many galaxies, not just our own. Curtis was 47 years old and worked at Lick Observatory. He and others felt the spiral-shaped objects visible through telescopes were other galaxies as big as the Milky Way. If that were the case, then they’d have to be millions of light-years away.

Curtis also argued that the Milky Way was fairly small, with the Sun at its center.

The other presenter was Harlow Shapley, a 34-year-old at Mount Wilson Observatory. He said the “spiral nebulae” were star clusters on the edge of the Milky Way. But he said the Milky Way was bigger than Curtis’s estimate, with the Sun far from the center.

The Great Debate proved to be a dividing line — between old concepts of a small galaxy and universe, and more modern ones where both stretch across vast distances.