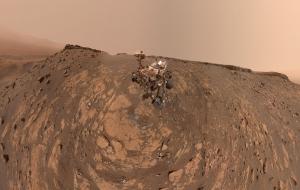 The Mars rover Curiosity snapped this selfie in February. It used a camera on its robotic arm to take several photographs, which were combined to remove the arm from view. Among other accomplishments, the rover has "sniffed" the compound methane, which can be produced by living organisms. Spacecraft in orbit have confirmed some of those detections but not others. Methane also can be produced by geological processes, so its presence on Mars doesn't necessarily indicate the presence of life. [NASA/JPL/MSSS]

One of the goals of the missions to Mars is to find signs of life. Some of the best signs to date are periodic “burps” of methane – a compound that can be produced by living organisms. But the burps aren’t common – and they’re hard to see.

In June, for example, the Curiosity rover detected the heaviest concentration of methane yet seen – more than 20 parts per billion. That’s dozens of times higher than the average level. But two spacecraft in Mars orbit passed above Curiosity within hours – and didn’t “sniff” a thing.

Several methane outbursts have been seen over the years – by orbiters, telescopes on Earth, and especially by Curiosity.

Some of the rover’s detections have also been seen by Mars orbiters. But the one in June wasn’t. That might be because Curiosity was looking at night, the orbiters during the day. Sunlight destroys methane, so it might have disappeared by the time the orbiters rolled into view.

Scientists are trying to pinpoint where the methane is coming from. That should help them figure out whether it’s produced by life on the Red Planet.

Mars teams up with the Moon at first light tomorrow. It looks like an orange star above the Moon. Saturn and Jupiter line up to their upper right.