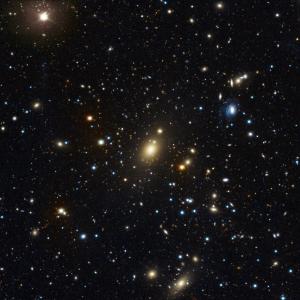 The cluster known as Abell 85 contains more than 500 galaxies. Its central galaxy, Holm 15A, is a heavyweight in its own right, many times larger and more massive than our home galaxy, the Milky Way. And its core may contain the largest black hole yet discovered, weighing in at 40 billion times the mass of the Sun. The black holes may have grown sUo large through the merger of two heavyweight galaxies, each with its own giant black hole. [Matthias Kluge/USM/MPE]

Cetus, the whale or sea monster, stands low in the southwest as night falls. The constellation is faint. But its brightest star, Diphda, is fairly easy to pick out, to the lower right of Venus, the “evening star.”

Cetus is far from the glow of the Milky Way — the band of light that outlines the disk of our home galaxy. That provides a better view of the galaxies beyond the Milky Way. In fact, a giant cluster of galaxies is near Diphda. And one of those galaxies is home to the biggest black hole yet discovered.

Abell 85 consists of more than 500 galaxies. The one at the center is a monster — it’s much bigger and heavier than the Milky Way. It’s an old galaxy whose stars are spread fairly evenly, so it looks a bit like a fuzzy football.

The black hole may have grown so monstrous during the merger of two galaxies. As the black holes in those galaxies came together, they whipped up the space around them like batter in a blender. Many of the stars around them were flung away from the core of the merging galaxies. That left the center of the combined galaxy with fairly few stars — but with a single giant black hole.