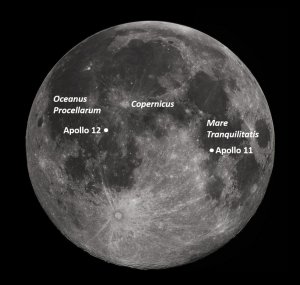 One of the largest features on the Moon is the Ocean of Storms, a dark volcanic plain at left and upper left in this image of the full Moon. It's part of a larger basin that covers about 10 percent of the lunar surface. The Surveyor 3 spacecraft landed in the Ocean of Storms in 1967, and astronauts guided Apollo 12 to a precise touchdown next to the robotic craft in November 1969. [NASA]

The surface of the Moon is dotted with a score of lakes, even more seas, plus assorted bays and marshes. But there’s only one ocean: the Ocean of Storms. It’s part of a large basin that’s one of the biggest features on the entire Moon.

The “watery” features are actually vast plains of volcanic rock. To long-ago skywatchers, they resembled bodies of water. So they called them seas, lakes, or other watery appellations.

The Ocean of Storms is in the northwestern quadrant of the lunar hemisphere that faces Earth. It’s the largest of the dark patches visible to the unaided eye.

The volcanic plain is part of a larger feature — a shallow depression known as a basin. It covers about 10 percent of the lunar surface — roughly half the land area of the United States. At most, though, it’s only two or three miles deep.

Geologists don’t agree on what created the basin. It could have been an impact by a giant asteroid into the infant Moon. Or it could have been created by heating inside the Moon itself. Whatever the mechanism, though, it left a giant feature on the lunar surface: its only “ocean.”

Look for the Moon climbing into good view in late evening. The Ocean of Storms is near the lower left edge of the Moon at that hour, but wheels to the top of the lunar disk later on. And the Moon has a bright companion: Regulus, the brightest star of the lion. It’s below the Moon as they climb into view, and closer to the Moon at first light tomorrow.